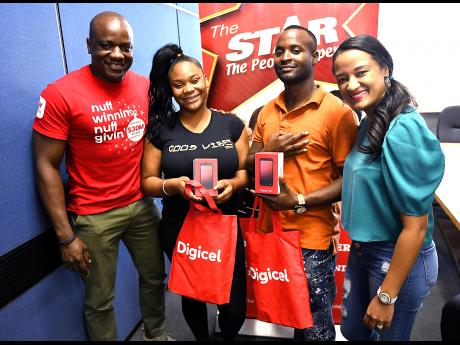 Zeniel 'Voqalelli' Elliot never thought he would win when he entered the STAR/Digicel Christmas Promotion, but his passion for music led him to participate and remix his favourite carol, This Christmas.

An elated Elliot stopped by the STAR office on North Street to collect his brand new Digicel phone and other prizes on Monday. He explained that he entered after a friend challenged him to do so.

"A few days before one of my brethren tagged me on Instagram and tell mi that I should enter the competition and give him the phone. I started to think about the lyrics that I would put together and asked my babymother to help me. About four days passed before I could fully come up with the lyrics and post it," he said.

To enter the competition, persons were asked to remix their favourite Christmas carol and upload a one-minute video to Instagram.

"Mi post it a bit late, so mi never know if the video was even posted. Is the following day mi realise say mi win. Mi really feel happy because the next phone did mash up and a last week mi buy a new one. Believe it or not, but this little competition has helped to boost my music career so I just have to thank STAR and Digicel for the opportunity," he said.

Even more excited to emerge as a winner is Barbican resident Michelle Jordine, who said that she was extremely nervous when she uploaded her video.

"I did really want a phone so when I saw the competition being advertised, I knew it was easy, so I just make up a song and submit it. I read some of the comments how they were criticising other entrants, and I was kinda afraid. But I gained the confidence to post my video and inbox persons to vote for me, and I turned out to be a winner," she said.

Having uploaded videos that got the most votes on the days they entered the competition, they each won a DL2 smartphone, a 28-day Nuff Social Plan ($3,000 value) and $1,000 prepaid credit.

Elon Parkinson, public relations and communications manager at Digicel, said he was fascinated with each entrant's effort, adding that Elliot and Joline join more than 45,000 persons who have won in their Christmas promotions.