Criminals try to blow up cops 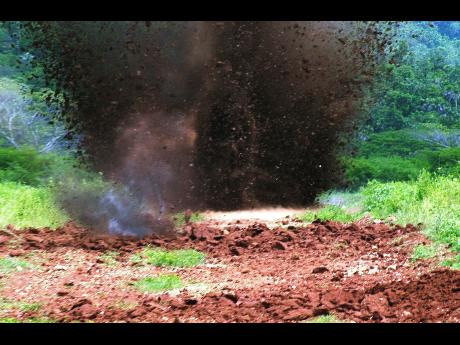 A police sergeant was injured by an hand grenade during a police operation in Alexandria, St Ann.

According to police reports, at about 9 p.m. on Thursday, a team from the Mobile Reserve was conducting operations in search of wanted men implicated in a March 18 quadruple murder in Westmoreland, when an explosive device was thrown at them, injuring the officer.

Superintendent Gary Francis of the St Ann Police Division confirmed that at least two of the explosive devices were thrown, one exploded causing injury to the officer, while the other was detonated by the Explosive Ordnance Disposal (EOD) team.

"It is not only unusual but extremely dangerous and of great concern to see the kind of artillery that the criminal elements are willing to use against our citizens," Francis said.

"While they were in a house firing sustained bullets at the security forces, they had inside two children and the mother. So they are selfish and cruel and have no care for life," he continued.

Francis is greatly concerned especially in light of the damage that the devices could cause.

Meanwhile, the injured officer, who was taken to hospital for treatment, is said to be recovering. An unidentified man was fatally shot in the gun battle.