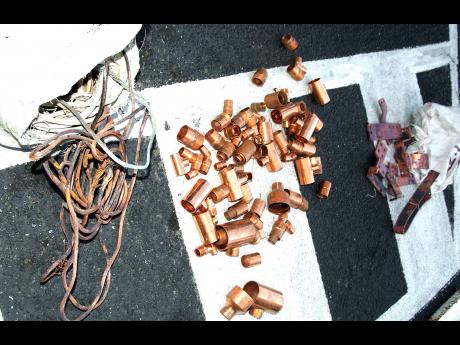 These stolen copper wire and pipes were recovered in 2010.

Scrap metal exporters are adamant that the industry is not to be blamed for the theft of copper cables that are used by telecommunications companies to transmit signals to their customers.

The theft of these cables have been very rampant in recent times. However, players involved in the trade of scrap metal believe that they are unfairly targeted.

The exporter noted that the process of shipping copper is a very tedious process that takes a long time for the dealership to see a profit.

"Shipping copper come in like partner. It tek too long. If yuh a go export copper and yuh carry it go the central processing points, yuh nah get it ship before bout August, unlike other scrap metal products weh yuh can get them shipped within two weeks. So, fi trade copper nuh mek no sense," he said.

A supervisor at an scrap metal dealership facility claims that the scrap metal industry plays a pivitol role in the beautification of the country.

"Right now, we see it as we cleaning up the country. Every day scraps come about. Dem tear dung buildings, garbage pile up and yuh have people weh have bare old metal store up and we deh ya fi dat," the supervisor said.

The operator of the scrap metal dealership welcomes the increased monitoring of the sector by the authorities.

"We appreciate the regular policing of the industry. But we want them treat the trade of scrap metal as if it is a business," he said.