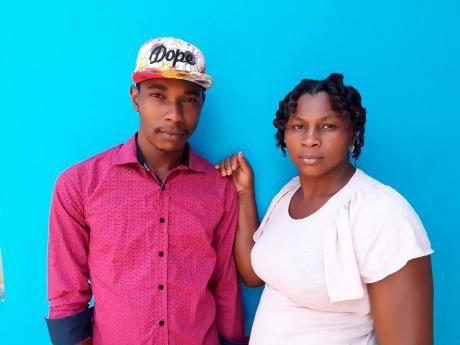 Charmaine Callum and her son Matthew. 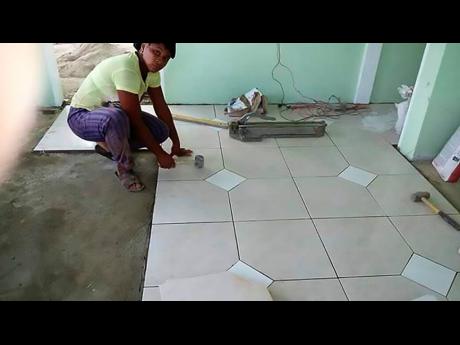 On a regular Thursday morning, Charmaine Callum would be on the job doing what she is best known for, tiling.

However, when THE WEEKEND STAR reached out to her, she was at home due to the COVID-19 scare.

“I haven’t done any job since COVID, I’m at home now. I had a job in Red Hills, but I’m not travelling that far or taking any risk at the moment,” said Callum. “Because of the virus, some people who wanted to get some work done say dem cyah spend the money now, because they don’t know how long the virus is gonna last for.”

Callum, 40, who is from a family that specialises in construction, said that her passion for tiling is inherent.

“I’ve been a tiler for about 13 years now. I was inspired by my mom because my mom used to do it, and I say, if my mother can do it, that means I’m built for it, too. Not only that, I always love construction from I was younger,” she said. “My brother is a tiler, too, so I learnt from him, and I was determined to learn because I love it so much. The first day I started working as a tiler, I didn’t even have lunch that day; I was so excited.”

Being a tiler has also granted her more financial stability.

“Before I turn a tiler, I was at home, enuh, just doing some washing for people. But it wasn’t working out moneywise. I wanted to put a roof over my kids’ heads because I have six of them. When I started to do the tiling, I got some better money to help me out more,” said Callum.

Being a female in a mostly male-dominated field has never been an issue for Callum.

“I get a lot of jobs. I was working with my brother, and he started working with me because I’ve been getting more jobs than him,” she said.

Moreover, Callum told THE WEEKEND STAR that persons are amazed to see a female on the job.

“Most of the time when people see that I’m a tiler, they said they love to see women working. I’m very proud of myself, too, because I always get good comments every time I go out to do a job, other people recommend me. I work to the best of my ability and please customers,” she added.

Callum said that her son is now following in her footsteps because she was able to teach him the skill.

“My son is good at tiling too. I’ve been teaching him from he was 15 years old. He is 23 now and he has become a very great tiler,” Callum said.

Callum and her son, like many others, are waiting for the novel coronavirus to be contained so life can revert to normal.