Twins with a difference! 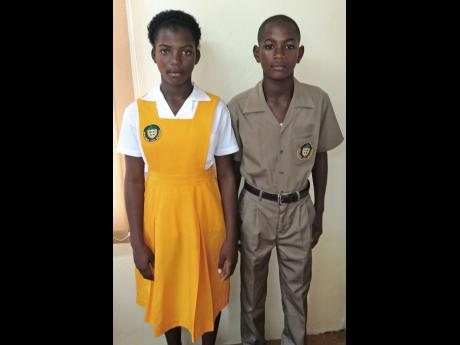 Twins with a difference!

Twin sister and brother Jovine and Javoun King are first form students at Spalding High School, Clarendon. They were born on September 9, 2003, with Jovine being the first to be born.

But unlike many twins who are happy to be part of a twin, the two do not share this sentiment.

"I do not like the idea of being born as part of a twin because sometimes my brother can be very disgusting and he is with me everywhere I go," shared Jovine, who also disclosed that they are not as close as other twins are.

However, Javoun was quick to share that he loves his twin sister because she always helps him with things such as schoolwork. However, according to him, she provokes him at times, but he is able to cope with it.

They told THE STAR's Life and Times that they both love science subjects. They are also thinking about the same career path after leaving school. They want to be trained as soldiers because they want to assist in the safety and security of the citizens of Jamaica. They said they are displeased with the crime in Jamaica.

Javoun said he enjoys chicken, well prepared, and natural juice. As for Jovine, she loves frankfurter with fried potatoes and enjoys Pepsi and apple juice.

The two past students of Morgan's Forrest Primary and Infant School, Clarendon, said they have always been in the same class from infant school through to high school.

"I love the idea of us being in the same class because when we do not have more than one textbook, we get the opportunity to share," said Jovine.

Javoun said he, too, loves the idea of being in the same class with his sister, because he gets the chance to share and study together.

Jovine does not like to attend church all the time. She said sometimes the services are boring. Javoun, however, does not share the same sentiment. He loves attending church.