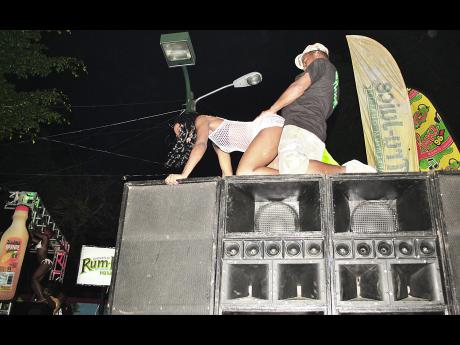 File These two dance atop a sound system at staging of Rumbar Chug It at the Aquasol Theme Park in Montego Bay in 2012.

A Corporate Area resident has expressed concern about loud music being played playing frequently in his community and it has now become a nuisance to his family.

He says his children cannot study or sleep in peace because the noise affects them and many mornings they wake up with headaches.

Despite numerous complaints to the operators of the music, he says they have refused to turn down the music.

"It is so frustrating that someone cannot live in peace in this home because of these selfish music operators in my community," he said.

"Last year some tenants moved into a house on my street and they have been nothing but problem for the other residents. They are always engaged in quarrels, fights and loud talking, but what bothers me most is that most of them do not work and they play loud music from early in the morning to late at nights.

"One night the music was so loud and was causing such a disturbance that I knocked on the gate and asked them to turn it down. They cursed me and asked if I did not like music then I should move out of the area.

"Now I bought my house from 2005 and they have just rented the house since last year and they have the nerve to tell me to move out of my house. I called their landlord and complained to him about the problem his tenants were posing for us in the community. He came and spoke to them about it and when he left, they cursed me saying I was the one who complained to the landlord.

"I told the landlord what happened and he said I should not pay them any mind. However, although the landlord spoke to them about the loud music and their bad behaviour in general, they continue to play the music very loud. I am really fed up with this situation and other residents are also complaining, but are afraid to say anything because they are afraid.

"My children are finding it difficult to study in the evenings.They have difficulty sleeping at nights because the music is played most times until after midnight. I wrote a letter to the landlord last week telling him that the situation was now becoming unbearable and he should do something about it. He called me saying that he called the tenants all the time reminding them to turn down the music. It is obvious they are not listening to the landlord.

"A friend visited me last week and when he heard the loud music he called the police who came and ordered them to turn off the music. They obeyed, but after the police left, they turned up the the music again and began to curse the neighbours that they called the police on them."

The Noise Abatement Act gives the police the power to take action when there are complaints against loud music or noise in a residential area. The fact that they continued playing the music after the police left should not be ignored. The residents should call the police again and inform them of the situation. The police have the power, under the Act, to seize the equipment and bring the offenders before the court. Section 3 of the Act states that "no person shall, on any private premises or in any public place at any time of day or night play any noisy instrument that is audible beyond a distance of one hundred metres from the source of such sound" and is reasonably capable of causing annoyance to persons in the vicinity. The first offence attracts a fine of $15,000 or three months' imprisonment and there are stiffer penalties for repeat offenders.