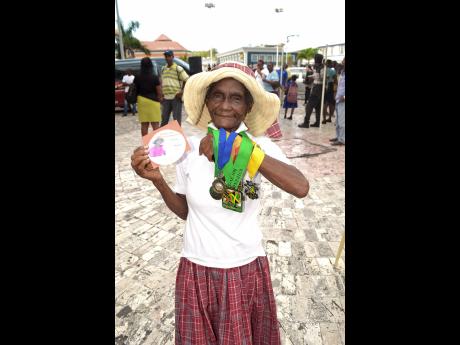 At 76 years old one of Gerline Nelson's biggest dream in to compete at the Olympics.

Nelson is one of Jamaica's oldest female athlete and she has numerous medals and trophies in her collection to show as evidence of her lengthy career.

She said her dream to compete for Jamaica at the Olympics came about after seeing country's great showing at the recent World Championships in Beijing and the fact that the country did not send someone to compete in the marathon, which is her area of speciality.

Nelson thinks she can fill that void, as she has the stamina and vigour to get the job done and make the country proud.

Hailing from a Lima District in St James, Nelson started competed in marathons at 66 years old and has competed in 71 Marathons in her career, winning 61 and placing second in 10.

In her career she has entered the Negril Marathon, Mobay City Run, Burger King Marathon and Tru Juice Cross Country races. She has also represented Jamaica at the senior citizen level, competing in Antigua and Trinidad.

On a daily basis, Nelson said she is awake from as early as 5 a.m. doing exercise in her home and then by 6 a.m., she takes to the streets and runs for several miles.

When asked what she think gave her the long-standing athletic stamina, she was quick to point out that she eats healthy - mostly vegetables and less meat.

Nelson, who is also a member of the Church Of God Prophecy in Lima, is also a gospel recording artiste and has released two singles, Wash Out Your Mouth and Conquer.