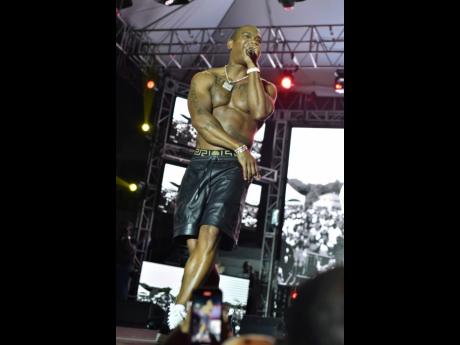 Both have performed in Jamaica before, but for Ja Rule, this was a major moment as it was his first time performing since an incident that happened over a decade ago, where he had a run-in with the authorities after using expletives during a show.

As the drinks flowed and the DJs played hits, patrons were transported back in time, and the trip had them partying until 4 a.m. Sunday. Ja Rule and Ashanti took the stage some time after 1 a.m. and had the audience 'mesmerised' for an hour-long performance of their greatest hits. The duo took turns rocking the crowd with tracks that have been etched into the minds of anyone who was in tune with music of the early 2000s. It was right before Ja Rule's performance of the hit song I'm Real that he reminded the audience that the track had got him in trouble on the island before.

"I ain't been in Jamaica in, like, 10 years. I been banned from Jamaica for 10 years for this same record. I'm glad that the rules have changed since I have come back to this [expletive]," he said before tossing his shirt into the obviously entertained crowd, who helped him rap the lyrics of the song.

According to billboard.com, it was in July 2002 that an arrest warrant was issued for the entertainer when he failed to appear on charges of using profanity during a concert in 2001. He had returned to the island to perform for Reggae Sumfest 2002, and during a press conference, apologised for his actions on the 2001 show.

Happy to be back, his voice echoed through the venue as he performed tunes such as Between Me and You, New York, Put It On Me, and Down 4 U. The unmatched synergy between him and Ashanti was also on full display as they also gave renditions of their popular hits Mesmerize and Always On Time.

The DJs for the evening were Kurt Riley, Coppershot, and Richie Feelings, who showcased there catalogue of tunes and provided a delicate mixture of old hits that sprung up feelings of nostalgia, and some new tracks that helped to keep the vibe going. Host Bambino also brought high energy to the stage as he guided the show along.

With only a few technical hiccups, Mega YUSH certainly kicked off the Christmas party season in fine style. The next staging of YUSH is scheduled for Christmas Eve.