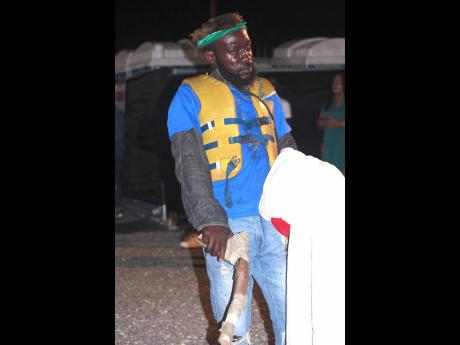 Local dancer and street personality Tuff Head, given name Matthew Maxwell, has built a brand off stunt dancing for the past two decades.

Despite knowing the dangers that are associated with some of his dance moves, the 37-year-old said that he has no plans to stop any time soon.

"Dancing is a profession where is a regular thing fi injury come inna it. When you jump and do all a dem moves, you put yourself at risk. I trust my team to help me do the stunts carefully, to avoid injury," Tuff Head told THE WEEKEND STAR.

Recently, the dancer, who is the founder of the three-member dance team out of Passage Fort in Portmore, St Catherine known as Tuff Head Squad, was seen onstage at Ding Dong's birthday party with his team performing a stunt. It involved them knocking him on the head with a steel barrel cover.

The dance move, that Tuff Head calls 'Pan Cover Style', was inspired by the 2007 dancehall hit Raging Bull, by Mr Vegas and Ovamarz.

"Is 15 years we a do pan cover style for now. Me take hits without fear and because it is art and there is a technique to everything. I have never been injured, no concussion or nothing like that, no headache, maybe one and two scratches, but again, me nah tell nobody do the dance move. We are professionals," Tuff Head said. "My job as a dancer help me survive and I have three children, I will continue to create and be careful."

His team members Johnny Fashion and Jabba Wacky also agreed that people should leave stunt performances to the professionals. They have been featured in several music videos including Lift Di Rifle by Tugstar and Bounty Killer. The squad is hosting an event called All Dancers Link Up - A Tribute to Bogle, on November 26.

"Bogle is one of the legends weh show me fi be a leader and a creator and that's why we can do what we can do," Tuff Head said.