I nearly stopped being me, says Dovey Magnum - Excited to be selected by Nicki Minaj for ‘Likkle Miss’ remix 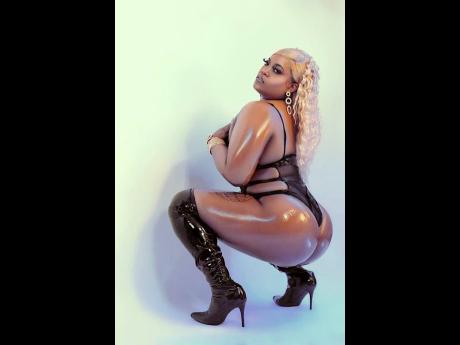 Fed up with criticism from all corners, dancehall diva Dovey Magnum said that she started to believe that she needed to change to fit into a mould to succeed.

But she is now celebrating that she never gave in, after being selected as one of the 'Fine Nine' females hand-picked by award-winning rapper Nicki Minaj to do an extended version of Skeng's Likkle Miss .

"Dem nearly mek me feel fraid and stop doing music the way I love to do music. I nearly stopped being me," Dovey Magnum told THE WEEKEND STAR. "Girl deejay badness and sexiness. Me sing, me all go conscious with Prayer Me Use And Win and it never matter, and I am one of few artistes who when she performs, sounds like how she does on her songs. But you know what? Who need fi notice my talent, a notice my talent."

Dovey Magnum believes her selection is because she remained true to herself. She said that the remix is another big break in her career, having experienced success and international recognition with her Bawl Out single five years ago. She said that she realised that Nicki Minaj was a fan of her music after she endorsed another single titled Harkive which Dovey Magnum released last October.

"Then couple weeks ago, she [Nicki Minaj] linked me up on Instagram to tell me she has a remix she wanted me to do a verse ... I had to double back and see if the message was really coming from her official page," she said. "Here I am in Jamaica, having returned to just rebuild and start over and then God blow one breeze come my way."

The extended version is creating history since its release on Wednesday, having featured female entertainers of Caribbean heritage. The other three Jamaican dancehall acts are Spice, Pamputtae and Lisa Mercedez. London Hill, who is said to have roots in Jamaica but was raised in Bronx, New York, British rapper Lady Leshurr, whose parents are from St Kitts and Nevis, and Trinidadian two soca queens Destra Garcia and Patrice Roberts complete the team.

Dovey Magnum noted that some people were critical of Nicki Minaj's initial remix of the Skeng single. But Dovey Magnum defended her, opining that "if she never go on it, the song woulda dead out long time in our dancehall landscape".

"It is time we stop fighting what is doing good for our music, and that is collaborating with others. Stop fighting what benefits all of us. I have linked many of my fellow dancehall artistes via social media to collab, help me get a buss too and I am left on 'seen'. Two days ago, when Nicki Minaj a tease who deh pon it, she a cappella my verse and me watch my greatest enemies a repost it," she said.