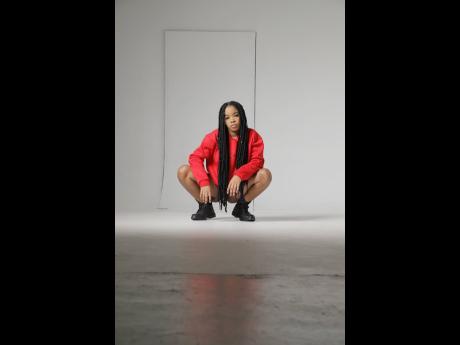 Recording artiste JCeleb believes that she is poised to be the next Jamaican musical sensation.

The singjay, given name Tajera Greaves, is looking to not just blow away the competition, but to transform the contemporary music scene with an eclectic mix of influences, including Afrobeat, R&B, reggae and dancehall. The 21-year-old Camperdown High School graduate fuses a smoky sultry voice with brilliantly composed lyrics that she writes herself.

Her first EP in 2020 was titled Rebirth and featured songs like the sexy uptempo Tightania which created a stir on YouTube just before the pandemic hit.

"Now that the entertainment scene is opening up, I want to do more live shows and tours. Got my feet wet recently doing a couple shows and the vibes were right. I work offa vibes, how mi feel and the reception from people in the audience. I'm striving towards putting out another EP that will lay the foundation for my first album when the time is right," she said.

That EP will feature tracks like: Treachery - a song about betrayal by a close friend; Feelings - a love song; and Confidential - which talks about a complicated relationship.

Describing her style as "chill and emotional", JCeleb is influenced heavily by Afrobeat, R&B and dancehall.

"My music is a fusion of all three influences," she said. JCeleb said that she has artistes like Alkaline, Khalid and Agent Sasco on her playlist, but she listens to a wide range of music for inspiration.

Academics have always been her strong point, however. After successfully completing her secondary school education, she became engulfed in exploring her musical side. A link-up with Larry 'Qwaun' Graham, head of Donrich Records, provided the missing ingredient in the formula, and the rest, as they say, is history.